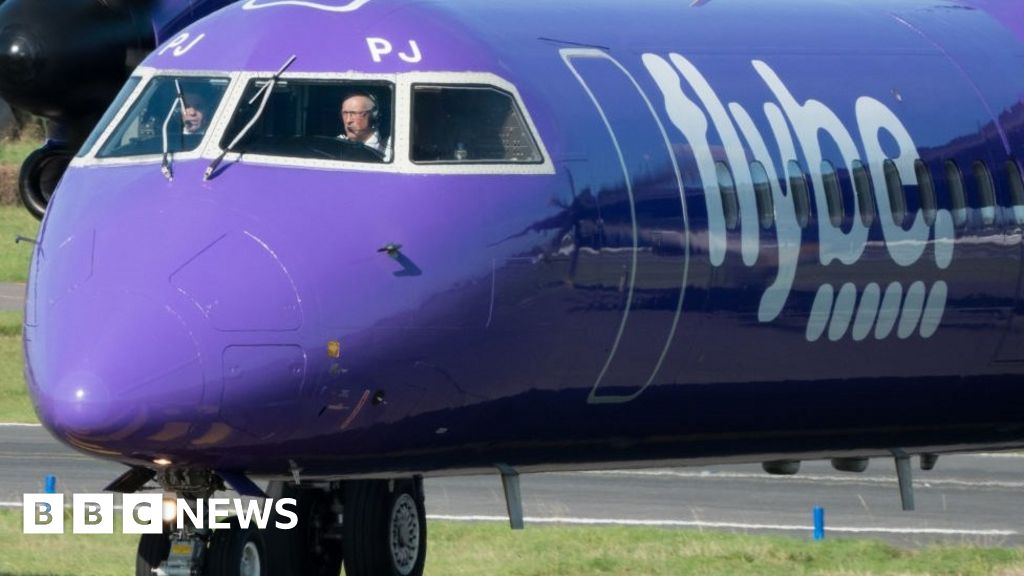 The government is considering changing air passenger duty rates for all domestic flights as part of a deal to save Flybe from collapse.

Chancellor Sajid Javid will meet with the business and transport departments on Tuesday to discuss the move, the BBC’s business editor says.

It would also improved regional connectivity – a key manifesto pledge.

Sky News reports a possible deal over air passenger duty could defer a payment of more than £100m for three years.

It would potentially give Flybe time to implement a turnaround plan, financed by a consortium led by Virgin Atlantic which rescued the regional airline a year ago.

It would also secure more than 2,000 jobs at Flybe which are at risk if the company fails.

Flybe is a long-time critic of air passenger duty which it said disproportionately burdens its domestic customers because they have to pay £13 each time they take off from a UK airport.

Changes to air passenger duty could reduce the billions of pounds it generates for the government, which is expected to reach £3.7bn this financial year, according to Office for Budget Responsibility.

But Prime Minister Boris Johnson made improving transport links in the UK’s regions a central plank of the Conservative Party manifesto.

Beleaguered Flybe asked the government to consider deferring tens of millions of pounds it owes in airport duty to help stave off the collapse of Europe’s biggest regional airline.

That presented the government with two problems.

First, the creation of what Prime Minister Boris Johnson has previously described as a “moral hazard” – a dangerous precedent that would lead struggling companies to believe they could rely on the government to help them if they got into financial difficulties.

The solution? An industry wide cut to airport duties for internal UK flights.

It allows the government a chance to help Flybe while delivering on its promise to improve regional connectivity.

But it comes at a cost to the public finances and may be criticised for making it harder to deliver on promises to reduce the UK’s carbon emissions.

Flybe carries about eight million passengers a year from airports such as Southampton, Cardiff and Aberdeen, to the UK and Europe.

Its network of routes includes more than half of UK domestic flights outside London.

A group of local councils in Devon, where Flybe is headquartered, said: “We are aware that certain aspects of national policy, notably the air passenger duty regime in relation to domestic flights, has a significant impact on the company’s business model.”

They paid £2.8m for the airline and agreed to invest £100m in the loss-making business.

Flybe has refused to comment on talks over a rescue.

Its chief executive Mark Anderson told staff on Monday the airline is continuing to operate as normal.

“I do appreciate that the headlines some of you have already read are disturbing but I want you to know that we are determined to do everything we can to make this work,” he said.

As long as Flybe carries on flying, there is no need to worry and certainly no reason to try to get your money back, writes Simon Gompertz, BBC personal finance correspondent.

If the airline was to fail, however, all flights would most likely be cancelled. Those with paid-for bookings could find they lose their flights and their cash.

If your flight is part of a package deal covered by the ATOL scheme, then you should be protected and have the right to a re-booking or refund.

Otherwise you can try to retrieve the money from your credit card company, if that’s how you paid. There is also a debit card chargeback scheme which can help.

Many travel insurance policies are not much use in these situations, unless you stumped up extra for the Scheduled Airline Failure option or something similar.

Those stuck overseas might be left hoping that the government will direct the CAA to step in, as it did when Monarch and Thomas Cook went under, to bring back stranded passengers for free.

Will you be affected if Flybe goes into administration? Please share your experiences by emailing haveyoursay@bbc.co.uk.

Please include a contact number if you are willing to speak to a BBC journalist. You can also contact us in the following ways: